Tavares is a city located in central Lake County, Florida, and is the location of the County seat. It is considered part of the Orlando–Kissimmee–Sanford Metropolitan Statistical Area and its name is a popular Portuguese surname and toponym.

The City was founded by newspaper and railroad man Alexander St. Clair-Abrams in 1880 and named for his Portuguese ancestor.  In 1883 a post office was established, which was followed by a hotel, three stores, a sawmill, and eight cottages in 1884. St. Clair-Abrams later chartered a railroad to run from Tavares to Orlando. In 1919, Tavares was incorporated as a town. Today, Tavares is nestled between Mount Dora and Eustis and is considered a rural family community known for its many lakes, great fishing, boating and water sports.

Looking to sell your home in Tavares? Follow this link to get an "Instant" Home Value Report

Completely remodeled and rented duplex with new appliances, granite counters, wood look tile floors, new paint inside and out. Each side is a 2bed/1bath, 918 has a priv...

What a find. Has a 4th Bedroom. Move in ready. Wood Laminate Flooring. New Tile. New Carpeting. The 4th bedroom has a convenient nook-cubby closet for storage or for that...

VIRTUAL TOUR AVAILABLE AT https://my.matterport.com/show/?m=cBpaFFnqf9k&mls=1. Resort style living awaits you in this beautiful 3-bedroom/2-bath home with 1,781 sq. ft. i...

Plenty of quarantine space on this half acre fenced lot in the County. Just steps away from Lake Dora and conveniently located between Downtown Tavares and Downtown Mou...

Beautifully remodeled lakefront home on lake Dora canal. Home has a boathouse, deck and breathtaking views on the wide canal and a short distance from Lake Dora part of t...

Wow, if you want a new home, but don't want to wait 6 months to have it built, then this home is for you. Almost everything in this fully renovated home is brand new. T...

This Stunning Three Bedroom Two Bath Home surrounded by breathtaking landscaping and trees home in the 55 and older Gated Community of Royal Harbor welcomes you! A Spacio...

Looking for canal front living? Look no more. This is the perfect opportunity to own a 3/2 canal front home with 163 ft on the canal. This home has very mature oak, ...

Great location close to highway 19 and highway 441 in subdivision with playground. Great investment or home. Currently has tenant in place

WELCOME TO FLORIDA RETIREMENT LIVING AT ITS BEST. This beautiful 55+ community of SHANTINIKETAN In TAVARES Florida. This gated community offers all the amenities that you...

This stunning custom Chain of Lakes pool home is for the most discerning Buyer! Surround yourself with the perfect blend of luxury, style, and function as you step inside...

Welcome Home ! This remodeled split plan home has lots of space for the large family. It's close to the schools, and close to all the downtown Tavares activities, plus ...

Call today to tour this lovely home on a 1/2 acre lot with mature landscaping. Only two tenths of a mile from Lake Dora and Lake Shore Drive, tucked away and offering a p...

You don’t want to miss this unique Key West cottage-style home, built by KB Homes, placed in the highly sought-after Etowah (Eh-tow-ahh) Subdivision and being located in ...

ONE OF THE BEST DEALS IN ROYAL HARBOR! Great location in the community, just a short golf cart ride to all the amenities offered here. Seller is the original owner and ha...

If you like originality, Here It is, An Incomparable Home with Brilliant Attributes for a Discerning Buyer. A stylish entry suggests Casual Elegance to this tropically th... 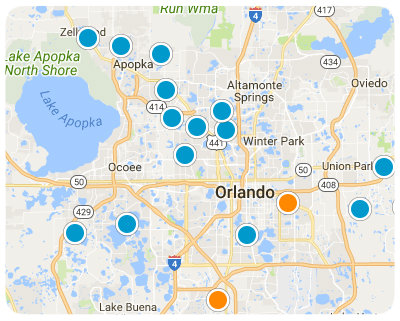